Ukraine is one of the largest countries in Europe. Just imagine: a night train from east to west will take more than 20 hours! But distances become a hundred or even a thousand times shorter when a neighbouring country invades your Motherland from three different directions at once.

The closest battle is now 150 miles from where I stay after I hastily left Kyiv – but I never feel that the war is “somewhere far away from me.” War is in every Ukrainian town or village, in every house, in every sound and, paradoxically, in silence.

Waking up every day, I don’t have time to rejoice that I survived today as morning is a news time.  This is the time when nightmares do not fade away, but on the contrary – become real and depicted in numbers and photos. At the time of writing, more than 90 children have been killed by the Russian occupiers, and there is no prayer that can fix it.

I would like to tell the story of the 8-year-old son of our friend. Let’s call him John. John was diagnosed with autism. The attentive reader could have noticed that I wrote the ‘son of our friend’ in singular. John’s mother suddenly died a couple years ago: one minute she was playing with her son, and the next one she just fell to the floor and never got up. John has a loving father who worked hard to earn enough for his family, but working hard means having less time for his son.

Fortunately, John went to a special class for children with diagnosed autism, where he worked with experienced teachers and trainers. But the war took it all away from John. His father works in critical town infrastructure. This means that he cannot leave his job and will ensure the livelihood of my city, regardless of whether helicopters, planes, bullets or shells fly over it. For John’s safety, he had to be separated from his father. John is now physically healthy, but he does not have the opportunity to go to school and continue the therapy which has already shown noticeable results. He can’t follow a diet, because now in Ukraine we eat what we can get, not what is useful or advised by nutritionists.

John’s story is a drop in the ocean of stories about children of war. Every day I think of his father and hope that he will stay safe. I believe that the war will end soon, he will take his son home, where John will feel as much love as can’t hardly be expressed by a single person but totally possible by a single parent.

During the war the number of single parents raises daily. And it’s not only about military families. Now the emergency services are very vulnerable – without any weapons they go to save lives – put out fires, pull people out of the rubble, doctor injuries. And they are defenceless against the Russian military, who do not want to hear about the Fourth Geneva Convention. Families are losing breadwinners, and it is you who can help these families. We cannot bring the heroes back to life, but it is in our hands to show that their sacrifice was not in vain.

Please donate to the official fund established by the Ukrainian government:

Purpose of payment: Donation for the families of rescuers who died or were injured during the war in Ukraine 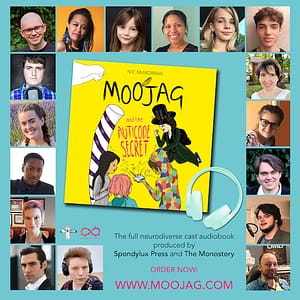 Audiobook review of the awesome Moojag and the Auticode Secret

Borderline Personality Disorder – in your words

Borderline Personality Disorder – commonly known as BPD – means different things to the people who have it. I did a survey on Twitter, asking

I was fortunate to come across Pic-A-Talk recently and was blown away by the concept.  They have agreed to do this post to share what